It’s a very tiny ministry that started a few years back, praying for little people. This post ran in 2015, and a similar article ran on Aleteia about spiritual adoption. With Halloween just around the corner, I thought it good to offer again prayers for our children.

It began by accident — if ever a thing of the Holy can be an accident — when an acquaintance asked that I pray for his children caught in the middle of his marital unrest.

After saying I would, there was a desire to pray specifically, and I asked for the name of each child. There were several; his was — and still is — a large Catholic family that was nearly run off the tracks.

I’ve never had children, nor really been around kids much through my life. I remember a dear friend spoke of praying for her sons and daughters, and another friend told me of tracing a cross on the foreheads of his children as he kissed them good-night.

The evening after our encounter the verse in Isaiah 54 came to mind:

Sing, O barren one, who did not bear; break forth into singing and cry aloud, you who have not been in travail! For the children of the desolate one will be more than the children of her that is married, says the LORD.

…and the one from Psalms 113 also nudged me:

He gives the barren woman a home, making her the joyous mother of children.

Here, I thought, was a way to love children that were not through me. And so began my ministry to pray for the future of our Church, a ministry I hope you too will adopt.

I purchased a small notebook that would fit in my purse or pocket, taped an old prayer card on the cover, and began seeking opportunities to ask permission from parents to add their children’s names to the book. The usual response was an enthusiastic, “Oh, please do!” The little book goes with me to Adoration and Mass, and has been touched to the Blessed Sacrament.

Included in the notebook is a parents prayer for the protection of children against demonic influences.

Eternal Father, you have entrusted the lives and souls of these children to my care. I beseech Thee now to offer them protection from demonic influences. Protect their eyes, ears, and lips from the lies, deceits, and seductions of the devil.

Defend them from the attacks of the evil spirits, as well as those from wicked persons who align themselves with the dark forces. Guide them to virtuous desires and interests, shielding them from music, projections, and written words which are of a diabolical nature.

Enlist your angels to stand beside them, leading them away from circumstances which would seduce them to sin. Keep them pure of heart to avoid the temptations of the flesh and physical gratification outside the confines of holy matrimony.

Assist them as they struggle against the enticements of the world, showing them that all good things come from you alone, and that by following your laws they will not only attain true happiness, but the gift of eternal life with you in heaven. Amen.

I liked being a spiritual aunt if not a physical parent, and feel a special kind of joy when I see pictures of those for whom I pray shared on social media.

Each morning I ask Mother Mary and Saint Joseph to pray with me for the protection of the children whose names I bring to their Son.

I kind of like having kids in the oratory.

Image by Stephen Marc from Pixabay .

It was one of those perfect fall days when the clear cerulean sky contrasted the vivid reds and yellows of the maples, poplars, and the honey locust in my yard.

Settling into this house in 1988 one of the first things I did on the property, after removing all the trash and debris, was add trees. It takes time for trees to fill in the landscape. So during the time of roof repairs, plumbing and furnace upgrades, and painting, the trees grew on.

Eventually the time came to develop the gardens, and then a few decades later it was time to tear them out. Through it all, the trees remained.

My favorite tree, now matured to over forty feet high, is the Skyline Honey Locust (Gleditsia triacanthos f. inermis ‘Skycole’). It’s a thorn-less Locust variety (inermis in Latin means unarmed) and half the height of its native cousins.

The dark gray limbs are sturdy through storms, flexing without shattering in gusting winds or heavy snows, and have a lovely curve to them—an elegant feminine line. It leafs out in the spring in a neon chartreuse turning to a bright Kelly green by summer. Small pinnate leaves offer open dappled shade and raking is never an issue. This variety lacks seed pods. I’ve never had issues with any diseases or pests warned about in the literature. I’ve called it “that blessed tree”—for its shade, for its beauty, for its endurance.

The other day I gathered my lunch and a rosary, and went to sit under its boughs to rest.

The sky was clear and the sunlight crisp. A light and stirring breeze caused the poplar leaves to chatter and, as I walked under the locust, a cascade of shimmering yellow began to fall.

Each small leaf reflected the sunlight as it fell. Bits of gold danced around me and I was elated by the tiny leaves that landed on my head and arms.

I imagined the blessings of God to be much the same as those golden leaves—small and cumulative, bearing light. We may not take as much notice of God’s blessings when they come one by one. But looking back at all the mercies in life, the cascade of light is thrilling.

Image by Daniel Kirsch from Pixabay .

It’s turning cold outside, and with it comes that scratching sound that distracts me from my prayers. They’re running up the chimney wall and across the ceiling. With any luck the rodents will run under the bathroom sink and into the cheese-filled trap.

I’m conflicted. I really hate having to kill mice. They are funny little things. One late summer evening sitting in the yard, I watched a pair of them scurry, hop, and tumble with one another under the sunflowers, gathering fallen seeds from birds.

I remember from childhood sleeping on the floor in the back room and, having saved tiny pieces of bread or corn from dinner, would place it under the radiator. Soon enough my “pet” field mouse would run up and snatch my gift. It wasn’t long until the little rodent was waiting for me to feed it. It would tickle my finger tip with its tiny paws, eat, and eventually dart off. The mouse was always aware of any danger to its tiny being and would run for cover at the slightest threat.

Having grown up in Detroit in an area where personal threat was a very real thing, I am (still) uncomfortable and distracted in public. For the love of God, I set that fear aside. It is not just the opportunity for physical harm that keeps me mindful of my surroundings, but mental and spiritual peril as well.

I fret over what my responsibility is in public situations. When men are being sarcastic and mean to women, or mothers being verbally abusive to energetic children, cell phone users speaking inappropriately in public spaces and ignoring their companions and children, and the general rudeness of people living under stress and the oppression of being without a sense of God.

My confidence of being a good Christian often wanes in public.

To be some sort of a presence of Christ we all work at being attentive to people and their wants, confusions, challenges, and stories. It is in our silence that they reveal their needs. I attempt to be a source of calm, offering prayer so the Holy Spirit can work in them.

I sidestep sharing on the same level. The encounter is not about me. They needn’t know more than I am a gardener, Benedictine Oblate, and that I love to pray—the people I meet fuel my desire to do so.

I see myself as a mouse, scurrying about the perimeter of life to avoid detection, and at the same time aware of what is going on around me. I snatch up little morsels of food I find—those little bits and pieces of human sorrows, needs, and emptiness that are dropped—and carry them back to a place of safety for prayer.

Meanwhile, the devil prowls about ready to pounce, and sometimes I get caught in his claws. Wounded, I know where to find healing. And from the wounding I learn to be more vigilant, to circle sooner behind the Holy and wait.

It’s not about being perfect in our encounters, or praying more. It’s about doing and being our best no matter how small we are.

Image by Shutterbug75 from Pixabay .

The oak is a long lived tree, often exceeding 500 years. With a trunk and limbs that are thick and sturdy, it’s rarely damaged by storms—the leaves are marcescent in the north, not dropping until spring, and hold snow loads of impressive weights! Wind shears have been known to strip the tree bare, leaving the branches intact. About the only feat of nature to regularly damage an oak is lightning—of all the tree species struck by lightening, the oak is most frequently hit.

Because of its endurance this tree came to symbolize the profound and unyielding strength and steadfastness of Christians’ faith in the face of adversity. St. Sebastian is depicted as being lashed to an oak. 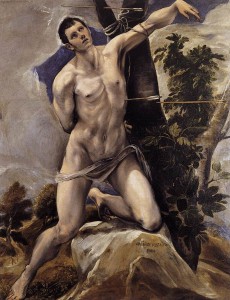 With its nearly incorruptible wood it came to connote salvation, and is symbolic of physical and moral vigor. And this explains its association to the Virgin Mary. 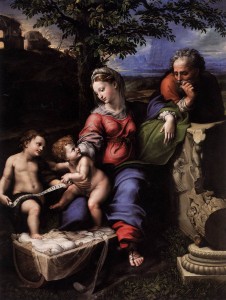 According to legend, the Christianization of heathen druidic tribes in Germany by Saint Boniface was marked by his felling of an oak, where upon a fir tree immediately grew and whose triangular shape symbolizes the Trinity—more on the fir in another column.

In the Bible, Abram moved his tent and came and dwelt by the oaks of Mamre, which are in Hebron, and there he built an altar to the LORD (Gen 13:18). Later we read that Joshua erects a large stone under an oak tree as the first covenant of the Lord (Josh. 24:26). In Isaiah 61, the prophet refers to the Israelites as “Oaks of Righteousness”.

And now you know that an image of a saint with an oak alludes to the saint’s firm incorruptible faith. 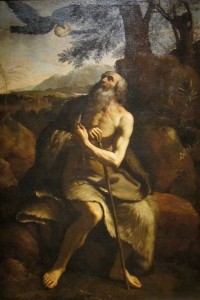 Image by Rafixx from Pixabay

I don’t know who originated this excellent tool –and may God bless them– but I’m sharing it again for those who live with Panic Disorder, Post Traumatic Stress Disorder, or any number of psychological challenges that can stop us cold in our tracks and halt even prayer. And 2020 has provided a lot of opportunities for fear!

This five point count down to grounding is powerful in its simplicity:

There now. Take a deep breath, and thank the Good Lord that in all things may He be glorified.

Image by jwvein from Pixabay .