Christians can express their faith in nearly limitless ways in a garden setting. Continuing with the theme of A Virtuous Garden, here are some of the aspects of the third cardinal virtue—fortitude. You can find the other columns for prudence here, and justice here.

According to the Catechism of the Catholic Church, #1808:

Fortitude is the moral virtue that ensures firmness in difficulties and constancy in the pursuit of the good. It strengthens the resolve to resist temptations and to overcome obstacles in the moral life. The virtue of fortitude enables one to conquer fear, even fear of death, and to face trials and persecutions. It disposes one even to renounce and sacrifice his life in defense of a just cause.

The word is defined as mental and emotional strength in facing difficulty, adversity, danger, or temptation courageously. To have mettle as one’s disposition or temperament, as a Christian, is to do one’s utmost, always, in the name of Jesus. 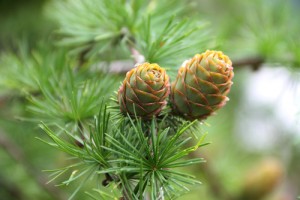 We can see how this sentiment applies to the pine tree. In the language of flowers it indicates a request, to remain strong for me. The Pinus genus has nearly 200 varieties and found throughout the world. Pines are long lived, anywhere from 100-1000 years, being a sturdy tree adapted to the environment in which it grows. A fun fact, the longest-lived is the Pinus longaeva, known as the Great Basin bristlecone pine. An individual of this species is one of the world’s oldest living organisms at around 4,600 years and can be found in the White Mountains of California.

There is a lovely story in our Catholic tradition of when the Holy Family was fleeing into Egypt took refuge under the boughs of a pine tree to avoid detection by pursing soldiers. You can read the rest of that story in my new book A Catholic Gardener’s Spiritual Almanac.

The Magnolia tree is another hardwood that is symbolic of fortitude, signifying be not discouraged, better days are coming. Fossil 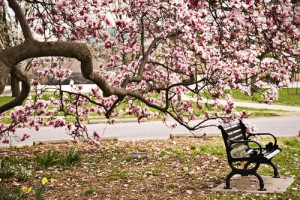 specimens date back nearly 20 million years. It is such a lovely tree, that, maybe God planted one in the Garden of Eden! The flowers were often given after the birth of a child symbolizing future good health and well being of the child and the mother.

One of the more beloved pink and white magnolias is the Saucer Magnolia, Magnolia x soulangeana, seen in this picture. My favorite is the yellow flowering Magnolia x brooklynensis ‘Yellow Bird’. Its buds form later in the spring and for this reason the flowers are rarely lost to hard frosts.  To choose one for your own garden, check out the Magnolia Society International site. 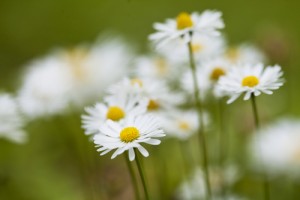 I love the low-growing herb German chamomile in the garden, especially when used to edge a sunny garden path. On a warm day its delicate fragrance smells of apples.

The two most commonly grown is the German chamomile Matricaria recutita, and the Roman Chamaemelum nobile. This herb has been used medicinally for centuries, so it is not surprising that it symbolizes energy in adversity, and to not despair.

Chamomile plants are very distinct in their growing conditions. The Roman species is a perennial plant, grows close to the ground and has very small flowers—tending to be bitter when used for teas. On the other hand the German chamomile is an annual growing up to three feet high, has larger blossoms, and is sweeter for teas—being the preferred for farm production. DISCLAIMER: because it does have medicinal affects, don’t consume this herb until you’ve done your homework. I’m not responsible…

For more Catholic garden ideas, my latest book, A Catholic Gardener’s Spiritual Almanac, will offer inspiration. To learn how to build a prayer garden, my first books, A Garden of Visible Prayer, will lead you through the process one step at a time.