O Jesus, our great High Priest, hear my humble prayers on behalf of your priests. Give them a deep faith, a bright and firm hope, and a burning love which will ever increase in the course of their priestly lives.

O loving Mother Mary, Mother of Priests, take to your heart your sons who are close to you because of their priestly ordination, and because of the power which they have received to carry on the work of Christ in a world which needs them so much. Be their comfort, be their joy, be their strength, and especially help them to live and to defend the ideals of consecrated celibacy.

Image by Tama66 at pixabay.com.

O Jesus, our beloved Lord and Savior, hear our humble prayers on behalf of your Sisters and Nuns.

Imag by StefanHoffmann at pixabay.com.

In the Adoration Chapel the lights are low. On the altar the oil candles flicker behind the gold monstrance, making the Blessed Sacrament appear opaque. I am soothed when here, comfortable and comforted.

Usually I write when I come before Our Lord. There is a narrow table at the back of the chapel where I am often found leaning over a spiral pad, blue gel-pen scratching in words.

Today I chose a pew near the front. I alternate between sitting and kneeling as I pray. My knees are a bit more stiff and do not allow staying on them for very long.  As I leaned against the back of the pew in front of me, the rosary moving between my fingers taps a whispering cadence against the wooden surface.

I can hear the clock on the opposite wall clicking away the seconds. I am gently reminded and heartened at how their passing brings me closer to eternity, my reunion.

My thoughts and prayers begin to focus on a woman, near my own age, who has faced too many traumas in her life. She was recently found near death in a motel room after a failed suicide attempt.

My heart aches for her. Her feelings of being unloved and hopeless, was a pain she didn’t know how to manage, a sorrow she couldn’t navigate.

My eyes refocus from the internal vision of her and her suffering to the altar and then the body of Christ. Looking down I see three pots of Peace Lilies—one of the few houseplants capable of living in low-light environments. The larger plant is near the windows, the smaller two are in front of the altar.

What I notice is different about one of these smaller lilies is that someone has removed the dead stems and leaves. The remaining leaves are sparse but healthy looking and shine even in the dim light.

I reflect on this and the suicidal woman. I wonder if she will soon come to realize, while institutionalized, that she too is being cleansed. That all that is dead and decaying in her heart is being removed. That she will be lighter once the purging has taken place. And like the Peace Lily, her growth will continue to be healthy in environments not as intense as others she may have known.

As I ready to leave I see something I hadn’t noticed before—a single small white flower emerging from the plant. Once cleansed of the unwanted decay, there is room for flowers to bud. Genuflecting low as I exit the pew I smile to myself…the woman for whom I’ve prayed will blossom soon enough. I am eager for her to know peace. 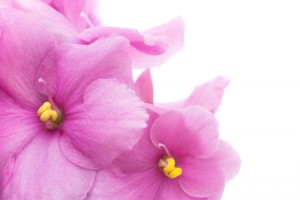 The houseplants in the upstairs hermitage needed watering. There aren’t as many as there used to be. As I now spend more time indoors as a writer, rather than outdoors as I once did being a gardener, I wanted sunlight streaming through the windows. The numerous houseplants I once had hoarded the light, so I gave the largest plants away.

I’ve written before of my love of the Crab Cactus, Schlumbergera, of which I have three—oh, and a start of a forth from a branch that snapped off. There is also the white orchid and honeysuckle, and by the north window in the oratory two African violets.

Earlier this winter the violets nearly died from lack of water. For the first few weeks when the furnace was running, I forgot to check them sooner—smaller pots dry quicker—and they dried back hard. It doesn’t take long to damage a plant!

While watering I noticed, with relief, they had recovered nicely with an abundance of new leaves, fuzzy and bright green. 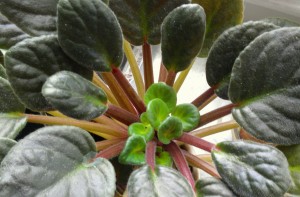 Quite a while ago I read the story of a woman who had a male friend who attended AA meetings with her.  The woman, who was moving out of the area, had met him for lunch and during their conversation asked how he was managing being alone. He shared with her the advice he’d received from his therapist, who had given him a concrete marker of when he could begin dating. It was, her friend believed, an easily attainable goal: keep houseplants alive for one year, and if he did, then get a pet. If he could keep both plants and pet healthy and happy for the following year dating could start.

It was nearing the end of that time when she unexpectedly saw her friend again. After their excited greetings, she asked if he was dating. He began to tear up and leaning in for a hug told her, “No, the damn plants keep dying.”

Yes, yes, I can almost hear some of you yelping about having a black thumb. But the story is a good lesson about attentiveness that is not centered on one’s self.

First you must want to spend a little time and learn what it takes to care for something—like a specific houseplant. Does it need bright, indirect, or low light? What is the temperature and humidity in your home, and is it suited to that plant? Watering needs vary depending on plant species, its size, and the previous two points. Once you learn these things, you need to be willing to invest that knowledge in the object and be attentive to it—plant, pet, or person.

When I consider friends who have taken on the role of a catechist, well, most anyone grounded in faith, I see this playing out. They’ve nurtured their own seeds of faith, having investing time to learn about our religion. After that they then could be attentive to the developing faith of others.

Neglect the truth of what is needed for proper development, being too busy to be attentive, and damage takes place, stunting growth.

Moving on to water the remaining plants, I step past my old dog, Lilly, sleeping in her bed, and walk carefully to the next room with the an elderly kitty rubbing against my leg. I have no desire to date, but if I did, I might be about there. 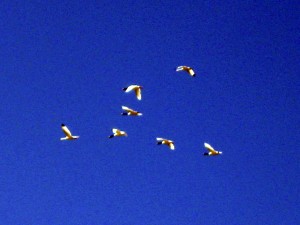 I did not see the migrating birds as they flew past, nor did I hear their calls. What I did see was fifty, maybe a hundred, small darting shadows cross over the lawn and my arms. Suddenly I felt heavy in the shadow of birds and my heart longed for home.

Where I live is within the flyway of several species of birds. It’s not unusual in the fall to stop the car when driving along farm lanes and wait on cranes coming in low, legs down, wings cupped, landing easily in marshes or corn fields.

The timing of their migrations are controlled primarily by the changes in sunlight. The day length signals the seasonal movement from the region of spring breeding to the place of wintering rest.

There is an instinctive stirring of such birds to migrate, an internal movement of the spirit towards a home. It is not the same as a journey, which is an irregular and singular event. Migration is done seasonally, aroused by light, and usually follows a path of food along the route.

There is seasonality to my prayer life as well; aroused by The Light my spirit yearns towards an eternal home. It too follows a route of nourishment.

As daylight hours decrease, a faith-filled migration draws me towards the Feast of Christ the King and Advent, and the contemplative resting in the abundance of His gifts. I am just as drawn in a few months, in the lengthening of days, to an active Lent and will long for new life and fresh air in my faith.

Like the flock of little birds that passed overhead, I am heartened by the coming winter—seasonally and temporally—to find rest.

(Image by Alvimann at morguefile.com)