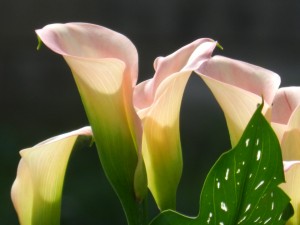 Each year I would plant a few tender bulbs for their summer blooms or dramatic leaves. They are a wonderful addition to the home garden.

The term tender bulb refers to bulbs, corms, tubers, and rhizomes that will be winter killed by our Zone 5 winters. These tender bulbs need to be removed from the ground before winter sets in. A few of the more commonly grown tender bulbs are Canna, Tuberous Begonia, Gladiolus, Caladium, Belladonna Lilies, Elephant Ears, and Crocosmia.

Most tender bulbs are dug after the first frost has killed the tops and temperatures have not dropped enough to freeze the ground. Others such as Belladonna Lilies, Caladiums, Elephant Ears (Alocasia and Colocasia), and Callas, are removed before air temperatures regularly drop below 45 degrees.

Start by gathering containers to hold your bulbs as you dig them. I tag each container with the name of the bulbs and color, reusing this tag for final storage. The thin plastic slats of an old venetian blind work perfectly and are easily cut to size. Use a permanent marker for writing.

Lift bulbs carefully using a spading fork. Loosen the soil by working around all sides of the bulb, giving it a wide berth to avoid damage to the root structure. When you remove the bulb from the ground, gently loosen or shake off excess soil. Cut off the tops to within an inch of the bulb, and place it in the container with its tag.

Cleaning comes next. An easy method that keeps things relatively clean and saves my back is to lay a large piece of hardware cloth over the top of an empty garbage can. Put the bulbs on top and gently hose them off; the water and soil fall into the can. This set-up is located beside the compost pile—periodically tip the garbage can with its soil and water into the heap. With Gladiolus, break off and retain new fleshy corms from the older corm, and discard the older into the compost as well.

To cure the bulbs and allow them to dry, spread them out in a single layer in a shady location where there is good air movement. A mesh top patio table is perfect because air can circulate underneath the bulbs. Let them cure for a day or two. Protect them from frost during this time.

Before storing, inspect bulbs for damage. It is good practice to dust the bulbs with an insecticidal fungicide before storing. Read the package label to be sure it will work for your bulbs.

Storing Gladiolus and similar corms is little different. They will need to dry for about three weeks. Afterwards, store them in a paper bag in a cool dry environment.

Most other tender bulbs are stored in open containers, covered in vermiculite (my favorite) or sphagnum peat and stored in the dark at around 45-50 degrees. The area must also be low in humidity and free of ethylene gas produced by apples and other fruits.

Because tender bulbs in storage are still living things, you will need to inspect them periodically during the hibernation period. If bulbs look like they are shriveling, mist lightly. Remove those that look diseased and cut away soft rotting sections from fleshy tubers.

For more information on specific bulbs and storage requirements, see the extension bulletin “Storing Tender Bulbs and Bulb Like Structures” printed by University of Minnesota Extension.

Just some pictures from the gardens… 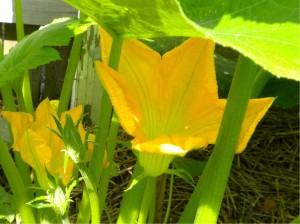 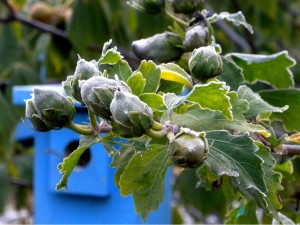 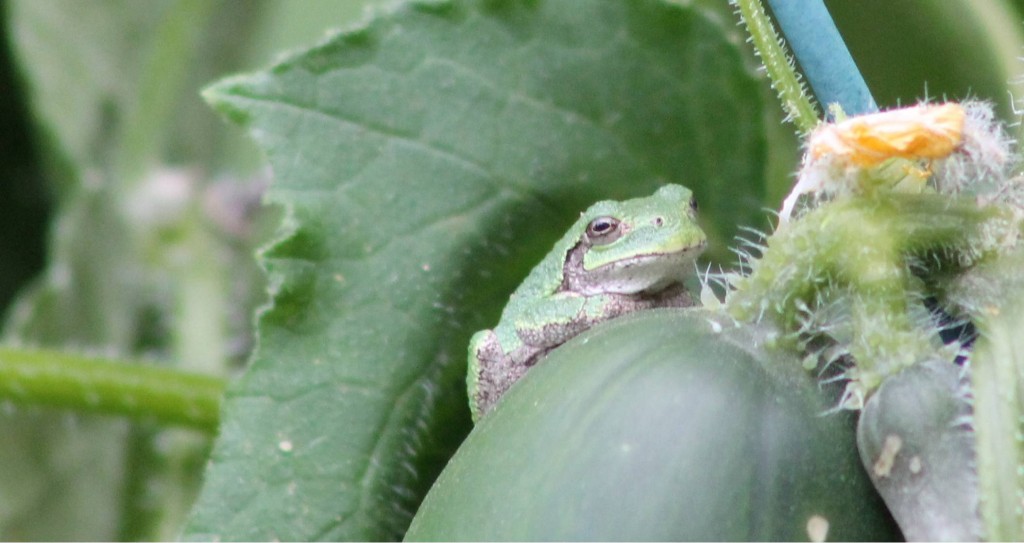 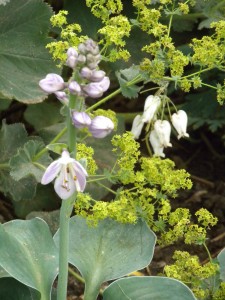 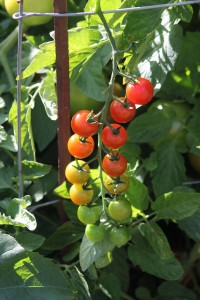 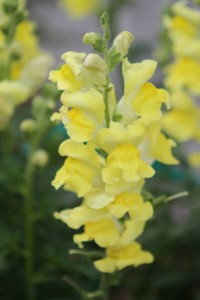 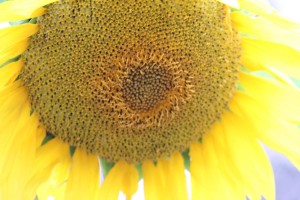 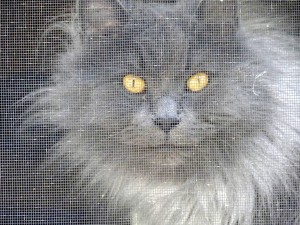 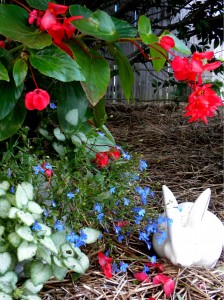 My idea of garden ornamentation 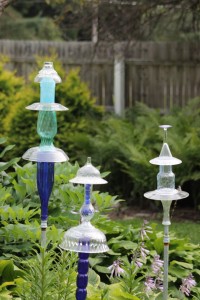 …and glass totems too 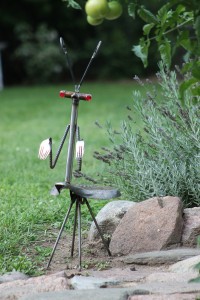 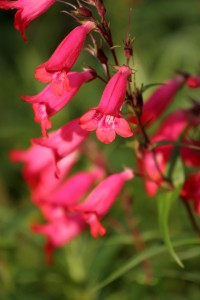 Like most gardeners I like a lot of flowers all season.  If you’re not a fan of annuals, you probably search for the few perennials that bloom all summer. You can also extend the bloom period of perennials by deadheading.

Deadheading is the maintenance practice of removing spent flowers. By deadheading you keep the plants looking tidy, redirect the plant’s energy from seed production to roots and top growth, minimize reseeding, and for most perennials prolong the flowering period for a couple of weeks. Extending a blooming period is different than remontant blooming where a cultivar is designed to “remount” with blossoms a second time in the season without our intervention, i.e. specific cultivars of Daylilies or the yellow Corydalis.

Deadheading can range from a daily activity to every couple of weeks depending on seasonal temperatures, rainfall, and the species. Often times when I wandered through my (small) backyard in the morning, coffee cup in hand, I’d find myself snapping off spent flowers.  I felt less overwhelmed by doing this task daily.

Your queue will be the overall appearance of the perennial as flowers decline. But don’t wait too long to deadhead, unless you are saving seeds. When spent flowers become seed heads, chemical changes occur that can halt flower production.

There are several perennials that produce flowers along their stems and on a spike that can have their blooming period extended by deadheading.

To deadhead perennials that produce flowers along their stem, known as laterally, cut just below the spent flower at the first set of leaves or next bud. A few common perennials with both terminal and lateral flowering are Bee Balm (Monarda), Blanket Flower (Gaillardia), Coneflower (Echinacea), False Sunflowers (Heliopsis), Garden Phlox (Phlox paniculata), Shasta Daisy (Leucanthemum) and Stokes’ Aster (Stokesia).

There are several perennials that flower from the bottom up on single or multi-branching spikes. The single flowering spike should be deadheaded when about three quarters of the stem has finished blooming. Cut it off at the same junction as mentioned above. In the case of multi-branching spikes, like Globe Thistle (Echinops) or Hollyhock (Alcea), each flower head and its stem can be removed to the central spike. A few common perennials with spiked flowers are Culver’s Root (Veronicastrum), Delphinium, Foxglove (Digitalis), Lupine, Miniature Hollyhock (Sidalcea) and Spiked Speedwell (Veronica).

Deadheading flowers of one-time bloomers keeps them looking good but does not prolong the flowering. Some of the more recognizable single-season bloomers are Bergenia, Bleeding Heart (Dicentra), most Coral Bells (Heuchera), most Daylilies (Hemerocallis), Hosta, Iris, Lamb’s Ear (Stachys) and Rose Mallow (Hibiscus). Daylilies and Iris can be groomed daily but you will also need to remove the spent flowering stalks.

Another method of deadheading is shearing. This is done when masses of flowers die back all at once, as with thread leaf Coreopsis. With one hand gathering up the spent blooms and with the other clip off the stems and part of the upper leaf cover using garden scissors. Perennial Geranium (not the annual Pelargonium, aka Zonal) and Salvia can be cut back almost to the ground to produce a second flowering. This method may look messy, but all will look fine in a few days.

It’s no secret on how to have longer lasting color from your perennials…just give ‘em a pinch! 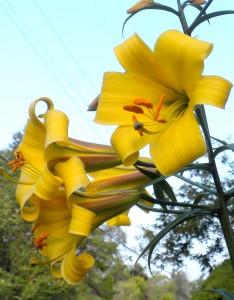 Next to the south wall of the screened porch is a small stand of Liliaceae ‘Golden Splendour’.  They are one of the few flowers remaining from last summer’s dig-out, when, because of arthritis, nearly all of my gardens were removed. This trumpet lily cultivar was introduced in 1957. It is tall—at nearly six feet—and the highly fragrant flowers are 7-10” long. It has been one of the pride and joys of my garden since it was planted in 1989. Twenty years ago a friend had taken a photo of me—standing proud at 5’ tall—beneath the canopy of blooms.

For about three weeks the racemes of trumpets slowly open from bottom to top, and the nectar furrows explode with scent. There is no mistaking it, as when the lilacs bloom, all the yard is perfumed.

When the air is still and humidity high the sweet aroma hangs dense. Through a few summer nights and early mornings I deeply inhale the sweetness and breathe my soul back into me. Like the scent of coming rain, it is a spiritual memory, an essence of God that awakens our sleeping hearts. 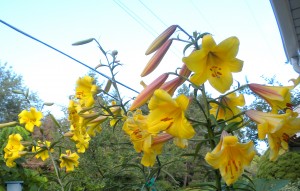 When we become aware of a fragrance in the garden we follow our nose. Gently wagging our heads we find the direction and move towards the source. We seek from the air the origin of our delight.

The delight of the soul is sought in much the same way. We pick up the spiritual fragrance of peace and our souls move towards the source until we breathe deep the sweetness of Holy Love. And we remember—a brief return to Paradise. 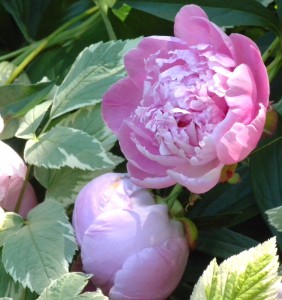 From spring forsythia branches to fall garden mums I bring the beauty and fragrance of my garden into the house. Some arrangements are minimalistic and modern while others are full and robust, looking very much like a 16th century Dutch painting. Either way, they grace my desk, home altar, or table—sometimes I take them to a friend.

Arranging flowers cut from your garden is a time honored tradition. It’s easy once you let go of the glossy magazine images inhibiting your creativity.

1. Start by walking through the garden and cutting a few stems of green leaves, and look for flowers recently or just starting to open. See the tips and Techniques section below.

2. After you have cut your selection, begin by choosing an appropriate vase: low for shorter stemmed and smaller flowering, larger and heavy (to prevent tipping) for fuller arrangements. A drinking glass or canning jar will work perfectly fine too.

3. Determine if you will view only one side of the arrangement or see it all the way around. Most arrangements are one sided, using fewer flowers.

4. Start your arrangement by “greening the vase.” This builds the foundation that holds the flowers in place.  Select ferns, hosta, tender branches or any combination of interesting leaves. If cutting branches, be sure you practice proper pruning to prevent an unsightly bare spot on your shrub. Let some of the greens drape over the edge if desired. Strip leaves from portion of stem that will be under water.

5. Next place your featured flowers at differing heights. This could be an arrangement of three large roses, a few stems of snapdragons or cone flowers. A good rule of thumb is for the arrangement’s proportions to be 1/3rd vase and 2/3rds flowers.

7. Finally add the spiller. These would be cuttings that fall over like floribunda (spray) roses, tuberous begonias or the softer stems of annual eucalyptus.

In the autumn I’ll use the flowering fronds of ornamental grasses to add height and texture.

Flowers with milky sap do not take up water as readily as other cut flowers and will not last as long in an arrangement. Some examples are poinsettia, milkweed, heliotrope, hollyhock, euphorbia and poppy. Most hydrangeas do not work well as cut flowers either.

Experiment with your flowers. Try different combinations. Make miniature arrangements as well as fuller ones. We learn what we like in the doing. So fear not and go cut some flowers!