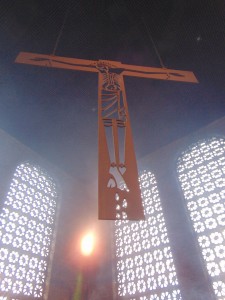 A few weeks ago we had a visiting priest who had been the associate at a neighboring parish. His homilies often sparked me to take notes, usually on the back of a bulletin during Mass. (Yes, I’ve become one of the little gray-haired ladies rummaging through her purse during the sermon, trying to find a pen.)

Father’s homily on that Sunday was about the Holy Spirit, the Third Person—big emphasis on “Person”—indwelling in us. I was a bit unsure how I felt about the idea of someone, holy or not, inside me. I watched too many scary movies in my younger days in which a creature consumes a character from the inside out—bursting forth from the victim’s chest or skull.

The message the priest offered was more a question. Did I truly believe that God is fully in me, diffused throughout my whole being, and in believing this, was I all-in? Uh, maybe.

His question and my “maybe” were both disconcerting.

Sure, I believe Jesus walked this earth, and no doubts about him being both God and human. I’m pretty confident too about the Holy Spirit, the Trinity, and the Virgin Mary. You know, the whole Creed thing.

I’m all-in, except for this one little toe hold (as I hang on the side of a spiritual cliff): Fear of being fully alive with love. It’s a terrifying responsibility to accept caritas.

There’s an other-worldliness that accompanies abandonment to the fire of friendship and love with the Holy. It compresses the ability to live in the world. That intensity for God used to be called “zeal”—and today, if it’s too far beyond what might be considered acceptable, it’s often called “delusion” at best, with “psychosis” a close second.

Some of us lack the ability to contain ourselves when the Holy overwhelms our emotions. Again I was reduced to sobbing at Mass after communion. It’s happened before, and I know I’m not the only one who’s experienced this. It’s the moment when the Person of the Holy Spirit within fully connects with the presence of the Eucharistic Jesus when consumed; a supernatural communion in a frail human being.

The woman beside me understood. She saw the need to protect the joyous and encircled me in her arms as a befuddled priest, deacon, and seminarian—along with most of the congregation—looked on.

The overwhelming passion of God’s love exaggerates our awareness of the smallness of our hearts.  It’s the sensation of the Holy that has bound itself to our flesh and blood, the reality that I am now His hands, His eyes, and His spoken Word in a world obsessed with itself.

I am pleading with Our God: Don’t let me go crazy, don’t let me be so consumed by you that the Holy Spirit bursts through my chest at every encounter with others.

As if I can place a condition on being all-in.