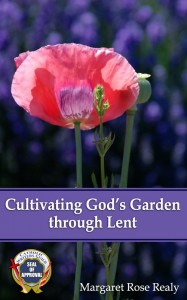 It must be a bit unnerving for a deacon to go all a cappella  in front of the congregation when cantering the Epiphany Proclamation. I’ve listened to friends Dr.Gregory Popcak and Deacon Greg Kandra — lovely voices both — chant the proclamations of The Epiphany or Easter. This year at a local church, the deacon there did an excellent chant as well. What I heard within his proclaiming was that Ash Wednesday is coming early this year on February 10. That’s only a few weeks away!

Like a lot of folks, I like having a Lenten book of reflections. Having a daily read to meditate upon helps us grow towards a personal Easter resurrection.

To that end, I would like to offer you an excerpt from my book, Cultivating God’s Garden through Lent, available on line through Amazon, Barnes and Noble, and the publisher Patheos Press, in hopes that you will consider it for your faith journey. It was awarded the Catholic Writers Guild Seal of Approval!

Friday of the First Week

The big Eastern White Pine tree that grew at the southwest corner of the house was recently removed by the local power company.

When it was young, I would attach food to it during the winter to feed the animals; peanut butter-coated pinecones rolled in seed, corn cob halves hung with twine, and home-baked animal cookies full of protein. Its adolescent boughs held out hope for many animals when food was scarce.

As it grew, the boughs spread further into the garden. It wasn’t until many years later that I figured out it was not the cultivar I had thought it to be. This Eastern White Pine was going to be big, very big. It had not been planted in an appropriate site so as to grow to its full potential.

So it grew, as the cliché goes, “where it was planted.” It protected the birds, housed the squirrels, and hid the raccoons. It buffeted winter winds and provided shade from hot summer suns.

I would listen from my upper bedroom windows as its boughs whispered when the winds blew through them. When working in the yard I would often stop and touch its long delicately soft needles, the same needles that would fall off in late summer and provide beautiful golden mulch for the flower beds. I loved how the new growth, called candles, would come out pointing toward heaven, and how the pollen would burst into the air like incense when I thumped the male cone clusters with my hand.

Repeatedly it needed harsh pruning to keep its limbs off the house. The lower boughs encroached into the yard so far that they eventually had to be trimmed up the trunk so one could walk under them. Its expansive limbs grew between the electrical wires and were repeatedly trimmed back by the power company. With all this cutting-back as it grew it became misshapen, less beautiful than it was intended to be. Yet it was as fully what it could be in the circumstances in which it was planted.

During storms, and there are many of them here, the branches would hit the wires as well as the sides of the house. During one particularly nasty winter, three massive limbs broke off due to snow loads. The blessing was that they brushed against and then fell free of the power lines, and completely missed the house and wooden stockade fence.

I had prayed many times about that tree. It needed to be removed and I could not pay to have that done. It was ruining the siding of the house. It was a threat to my neighbors during the winter because of its potential to create a power outage. It grew only feet from my bedroom wall and I feared a wind shear or tornado would drive it through the roof. I loved that tree. I was also frightened by it.

My prayers were answered one spring day when a representative from a tree trimming service hired by the power company came to my door. The young man who stood there very respectfully explained about the neighborhood pruning that would take place in a few weeks. As I walked outside with him, he delicately tried to describe to me what this large, already misshaped pine would look like if they trimmed it back the required distance to free the power lines.

While he spoke I was secretly hoping that the Holy Spirit had moved someone somewhere to answer my earlier prayers. When he asked permission to completely remove the tree I nearly squealed. He looked at me, startled and a little relieved as I exuberantly answered, “Oh yes, please!”

Having an overgrown tree removed may not seem like suitable stuff for prayers, especially when I think about a friend dying of cancer or the violence in the world. Yet, there it is once again, God’s attentiveness to the smallest details in my life. I sometimes think God just wants to see me wriggling with delight.

Let me always be confident in your love. Help me to know in my heart that every prayer uttered, no matter how seemingly insignificant, is heard by you. Let us accept that the betterment of a soul is always your answer to prayer, and be assured that you are ever present in the details of our lives.

If you’ve already read the book, thank you! Please let others know that you enjoyed it, and maybe, if you have the time, leave an Amazon review.

Also for the new year from Ave Maria Press, is another one of my books, A Catholic Gardener’s Spiritual Almanac. Its a month-by-month look at our faith traditions, how to create liturgical gardens, and some good old fashioned gardening advice. 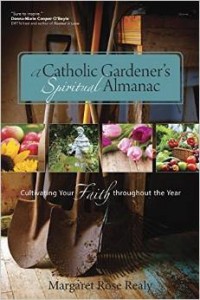