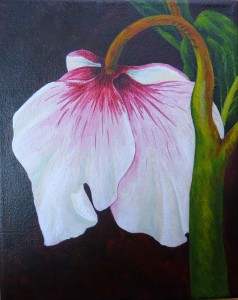 A story often told on the Epiphany is the legend of the Christmas Rose. This lovely perennial plant is a Hellebore, and an excellent addition to any humus rich shade garden, especially in cooler USDA Hardiness Zones; it will grow in Zones 3-8. There are several cultivars with thick white petals crowned in red resembling the one in this story. I’ve grown several Hellebores in my Zone 5 gardens, some were evergreen and others that broke through the snow, often during Lent.

The flower in this story, Hellebor niger, blooms in the middle of winter in the mountains of central Europe. The story, which has slight variations depending on region, is about Madelon, a little shepherdess, and an angel’s helping hand.

One evening Madelon watched in amazement as three kings with their caravan moved past her flock and set up tents for the night. They were following the rays of a luminous star, the same star she’d seen for weeks. She had listened to her cousins tell of the sky being filled with angels just before it appeared, and how the heavens sang the glory of a holy baby in Bethlehem.

Madelon desperately wanted to see this baby but didn’t know the way, and of course the boys were all-too-busy to take her. She decided, since the other shepherds had returned to the keep watch over the sheep, she’d sneak away and followed the kings into Bethlehem.

Late the next day the caravan, with Madelon trailing behind, arrived at a tiny stable where the star illuminated a most perfect baby boy in his mother’s arms. The little shepherdess had not anticipated the overwhelming peace that surrounded the infant, and wept outside the stable because, unlike the Magi with their riches, she was poor and had nothing to give the newborn king. In both joy and grief Madelon sobbed, thinking she would have brought flowers if it hadn’t been winter and the ground hard with frost.

The girl felt someone close by, and looked up through her tears. The Archangel Gabriel had suddenly appeared and asked Madelon to follow him as he led her into the cold dark night. Stopping, he brushed the frosty earth with his palm, and at once the Christmas Rose sprang up and bloomed. Madelon was filled with joy and, drying her eyes, she plucked the beautiful white flowers—with its crown streaked red—and ran back to the manger to give them to the Holy Child.

The five pure white petals are crowned blood-red, symbolic of the five wounds of Christ, and the petals remain attached to the stem through the toughest of weather, just as a secure faith keeps us clinging to God. The leaves are palmate, shaped like the angel’s hand.

We all have gifts we bring to Our Lord; great or small, timely or late we give what we can as best we know how. Blessings and peace to all of you as your own gifts break bud.

I’ve shared three other Christmas stories at Aleteia: Flight into Egypt, the Grain Miracle; Juniper Boughs and the Holy Family’s Donkey; and Rosemary in the Life of Jesus, Mary and Joseph.