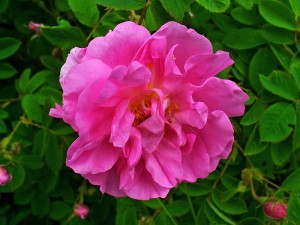 Marian gardens are the most popular Catholic garden for homes. A garden dedicated to Our Lady of Guadalupe would include the Damask rose.

Most of us know well the miracles associated with St. Juan Diego from Our Lady of Guadalupe, of her image imbedded on his tilma and the dark pink roses left growing on Tepeyac Hill for St. Juan after his vision. The Holy Virgin sent him back to those who doubted with unquestionable proof that she had indeed made the request for a shrine to be built on that hillside: The roses that Juan carried, besides it being winter and the wrong time of year for them to be flowering, were not from that region at all, but from the bishop’s home town of Castille, Spain. That rose was the Castilian Rose or Damask Rose, Rosa damascena.

The Damask rose is known for its fine fragrance and their flowers are harvested for commercial use in oils and perfumes, and for cooking. The crusader Robert de Brie is often given credit for bringing this rose from Persia—the name refers to Damascus, Syria, a major city in the region—to Europe in the mid thirteenth century. Another story says the Romans brought the rose to England.

Depending on what USDA Zone you live in, the modern cultivars of this rose would make an excellent addition to a larger garden dedicated to Our lady of Guadalupe (for those in colder climates, consider hardier doubled dark pink roses with high petal counts and strong fragrance).

Image By H. Zell (Own work),  via Wikimedia Commons.