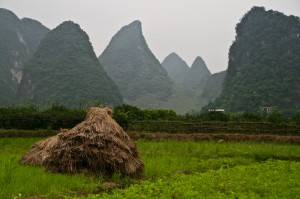 You may remember that Pope Francis instituted within the Church September 1 as the World Day of Prayer for the Care of Creation. Vatican Radio reported the event, in which Pope Francis noted that…

…the initiative follows in the footsteps of the Orthodox Church which, for the past 25 years, has dedicated September 1st, the beginning of a new year in the Orthodox liturgical calendar, to care for the environment. Since that time, the World Council of Churches has also marked a month-long ‘Time for Creation’ stretching from September 1st to the feast of St Francis of Assisi on October 4th.

Continuing on through this third week in the spirit of this time for creation, here is a beloved saint of Ireland.

At an early age St. Ciaran showed a love for learning. He came by this naturally through his maternal grandfather who was an historian and a poet. As a boy, while studying his lessons, he worked as a herdsman watching over the family cattle. Within this pastoral setting he developed a deep sense of kindness and wisdom well beyond his years. Eventually, as an adult, he established several monasteries and a school.

When he was of age he entered the monastery at Clonard where his miraculous gifts become known. His first miracle occurred while he traveled to Clonard. He asked his family for a cow to take with him as a gift to the monks, but they refused. At this he went to the herd he had tended to for so long and blessed it. As he departed for the monastery, a cow and her calf followed not far behind. When he discovered his bovine companions, he was delighted at the cow’s loyalty but dismayed that two animals had left his family’s herd. While offering a prayer for the cow’s safe return home, he drew a line in the ground instructing the cow that she should travel no further. The cow refused to cross the line and turned back, but the calf continued her pursuit of Ciaran. This calf, when mature, miraculously provided enough milk for all of the monastery and its guests.

There are many recorded miracles performed by St. Ciaran, one being that of the holy oats. Ireland has seen its share of famines, and one recorded in the Gaelic Irish annals took place from 536 to 539 when unusually cold temperatures caused widespread crop failures.

One day Ciaran was carrying a small sack of recently harvested oats to be milled in order to provide a little food for the monks. He prayed in gratitude for the oats that managed to grow when the fine wheat for bread had failed. As he prayed and sang the Psalms, the single sack of oats became much heavier and was miraculously transformed into the equivalent of four sacks of purest wheat. After the wheat was milled, Ciaran returned home and baked many loaves of bread with this holy flour. The older monks said the bread was the best they had ever tasted. These loaves not only satisfied their hunger but also were said to heal every sick person in the monastery who ate them.

This excerpt is from my recent book, A Catholic Gardener’s Spiritual Almanac, published through Ave Maria Press. In it you can read more about garden saints and find liturgical garden plans.