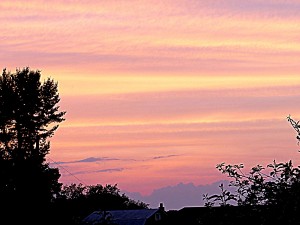 Sunset view from the oratory.

I finished praying Compline as the sun was setting, displaying a glorious coral and periwinkle sky. My heart was still troubled from the anger unleashed by the decision to allow gay couples legal union. Both sides, homosexuals and people of the cross, were spitting and hissing; the battle was decided and the war still raged.

The ugliness had driven me off-line. I ached as I prayed for the souls of the losers, for all had lost—gay and Christian alike. The personal decision to choose where a penis does or does not go had become public, vulgar, and base. It appeared Satan had won all bets.

My contemplation was sharply ended by the screams of robins piercing the night. Their nest was in the apple tree along the west fence where I could, from the oratory window, watch them flit between the branches with worms dangling from their beaks.

I blew out the candle and hurried downstairs to the back door. The flash of the yard light revealed a darkened form scurrying at the edge of the garden, then up and over the back stockade fence. I bless the feral cats that keep the mice in check, but this one had gone too far.

The next morning I went out—momentarily forced to retreat from the fog of mosquitoes and find some repellent—to assess the damage. It was bad. The mudded nest had been torn clean from the limb and partially cracked. By the aggravated chip-chip of the robins I knew there were babies still alive. 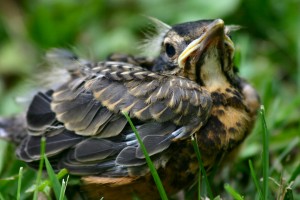 Like the childhood game of Hot Boiled Beans, I knew that I was getting closer to or farther from the chicks by the heated desperation of the parents. Eventually I found three very fat chicks, though one was rather cold from exposure.

I grouped the babies together under the geraniums near the apple tree, and then examined the fallen nest. The adult birds, unconcerned with my size, were flapping and darting at my head trying to protect what was left of their family.

In the shed I cut a couple of lengths of twine, tying one around the circumference of the nest to close the broken side, making sure the branch saddle was straight. Back to the tree, with the step ladder in place, the nest was aligned on a branch and the remaining pieces of twine secured it in the crotch of the limb. 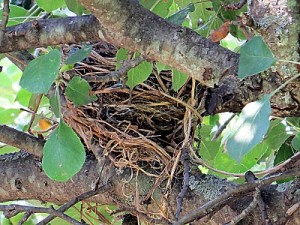 My attempt to secure the broken nest.

Gathering up the chicks, I poured them into the nest, and ducked as an adult’s wing made contact with the top of my head. I folded the ladder, walked it into the shed, and closed the doors.

Looking across the yard at the little family of birds just rescued, I felt sad. The adults had tried to drive away what they thought an intruder, when in truth restoration was taking place. I was trying in my own clumsy way to save this small family.

We all simply want to protect our family. But unlike the birds, we confuse the natural order of things. A sinister force lurks in the night to assail the family where vulnerability is greatest—the babies, the children who have not left the nest.