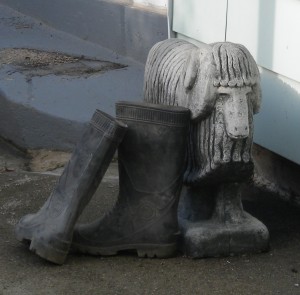 I had been trying to muddle along in my own way  for the past ten years with repairs. Things like using cement filler to fix the splits in the cement slab, caulking the windows, and using paint to fill cracks. You know, little stuff.

While I was working on the Marian garden I noticed—and tried to ignore—the ever increasing crack in the porch floor. And then I couldn’t. The central section dropped nearly a half inch within a week. A glass block cracked, a storm window popped a tab, and the paneling under the windows bowed out.

“This is going to cost a lot.” Was all I could think.

Contractors came and went. Bids were beyond reason and beyond my budget, but the porch HAD to be replaced…there were no other options. Except of course prayers, and that I did often.

Then Tim came along. He only works by referrals and alone. His specialty according to a trusted friend is structure and foundations—a skilled tradesman, honest, fair, works only one job to completion, and takes pride in his work hidden from most peoples’ view.

His hourly rate was more than fair. Not much of a talker, a down to business sort of guy, arrived exactly on time and began demolition to assess the issue. It was worse than I had thought. 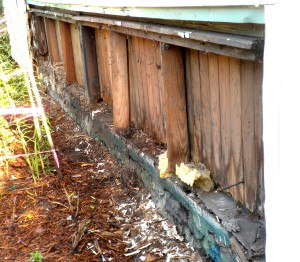 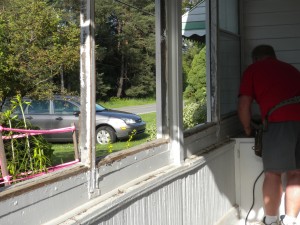 Animals had lived in the outside wall and eaten away the structure. The cement slab, well, wasn’t that at all. It was a slip of cement poured over who-knows-what that had eroded, and the whole of it had pushed out a fieldstone step-wall.

Tim was optimistic that he could do the repairs at a reasonable cost and talked me down as I escalated into financial panic.

You can see by the pictures work has begun.

Pray for contractor Tim, will you. He has a very nervous hermit to contend with—one who is overly anxious about saving her ‘Golden Splendour’ lilies! 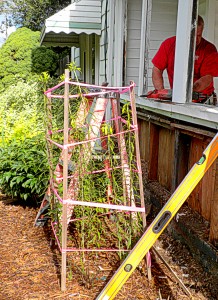