I’ve said before that I am better able to abstain than moderate—chocolate, cute shoes, rich coffee, television.

I’ve learned this month that building a new garden was no different. Once I started, going full-on seemed perfectly fine.

The early stages of the garden were worked with mindfulness to my arthritic spine. Then I prayed to persevere and work steady at putting down the ground cloth, bricks, and the next day all of the mulch. Even though it is a small garden, I was laid low…for days.

That prayer has been acknowledged as pure pridefulness and lack of humility. Like patience, one should pray carefully and specifically about fortitude. The lesson of ignoring moderation cost me time in bed with ice packs, doctor visits, and medication. I encourage others with physical limitations to not be as rash.

The gaining of patience is learned through trials. Gaining the grace to persevere is learned by a steady pace through difficulty, not by a bull-headed charge to the other side!

That being said, let’s get back to the garden…click through to read the first,  second, and third work efforts on the new Marian garden. 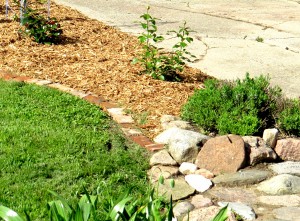 Having laid the ground cloth, I placed the bricks in the trench with the cloth tucked underneath. This arrangement would allow the mower wheels to ride on top and eliminate the need for hand trimming. By interspersing smaller broken bricks with the full sized, a smoother curve is created. The smaller bricks also allowed the edging to be incorporated at the end of the bed with the fieldstone walkway and hill of lavender. 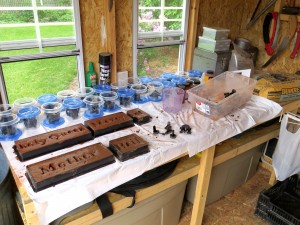 Using a lettering kit for making stepping stones, I made a few word-bricks “Hail holy Queen, Mother of Mercy” that I added to the line. 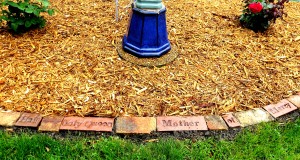 I prefer uncolored cypress mulch. Buying a load is less expensive than bagged and a lot of work to move. The standard bagged cypress is 3 cu. ft. and kind of heavy to work with. A home improvement store in my area carries 2 cu. ft. bags, still too much for me to lift but easy enough to maneuver. The clerk stacked the bags in the back of my little Ford wagon. Once home, from there I could slide them to the bumper, split the bag length wise, and roll the contents into the dump wagon. It was easy to tip the wagon up in the garden and spread the cypress. 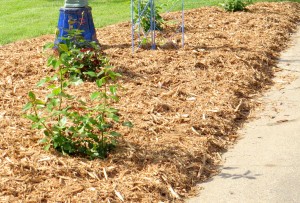 Recommendations are that a three inch pile of mulch be laid to prevent weeds and hold moisture. Having used a ground cloth to cut down on weeds—it also prevents the cypress from touching soil and breaking down—two inches of mulch would suffice. Leave about a palm-width of cypress away from the stems/trunk of bushes.

I was fortunate enough to find an old trellis in fair condition. By mixing outdoor paint leftover from the prayer box, I was able to paint it periwinkle blue. The trellis was placed over the late summer blooming clematis, Sprinkles, that I had planted earlier. Its a Group Three Prune, being cut back hard to about 6” in early spring, and has s a lovely 4-6” wide deep pink bloom with white freckles. Mother’s blue mantle will contrast nicely with it, don’t you think? 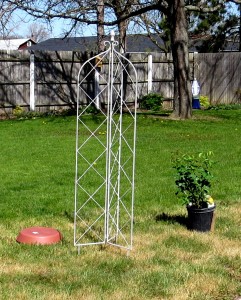 With the aid of a friend, the Marian statue was loaded into the wagon and rolled from behind the tree to its new home.

The garden was completed in time for The Visitation of the Blessed Virgin Mary on May 31. Reflections on the journey, Mother’s and mine, will be posted in a couple of days. For now, the view from the porch is lovely. 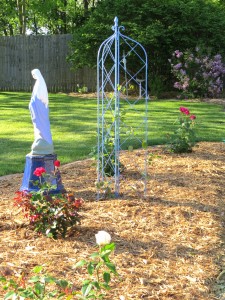