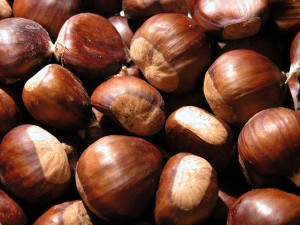 Those lovely, smooth, shiny-brown chestnuts we enjoy during the Christmas season are pretty rugged looking at the start.

The American chestnut tree, Castanea dentata, is native to eastern North America, and nearly died out in the early 1900s from an imported blight.

Its Latin name castanea is derived from the city Castanis in Asia Minor where the sweet chestnut, Castanea sativa, has been cultivated for centuries. It was introduced throughout Europe during Roman times and grown in many monastery gardens. It’s not unusual to find trees over 1000 years old in Great Britain. 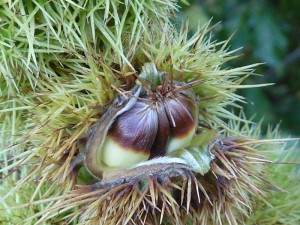 The sweet chestnut tree produces large round thorny burrs that encase a single nut. It is this hull configuration, and regrowth habit, that earned it the moniker, God’s Fruit.

The thorny hull evokes the torment of Jesus. Also associated with its spiny hull are the concepts of chastity and purity, a fruit protected. The Latin name castanea contains the root word castus which means chaste and pure. And it is here that it alludes to the Virgin Mary and the Immaculate Conception—Mary though surrounded by original sin is immune to it.

The chestnut tree in paintings points to the Resurrection. Trees that are grown for their wood can be cut nearly to the ground every few years. The practice, called coppicing, results in vigorous regrowth of numerous long straight shoots.

Carlo Crivelli, The Madonna of the Little Candle, 1470 (image public domain).The brocade pattern on the cloth beneath Mary’s feet are chestnut leaves. 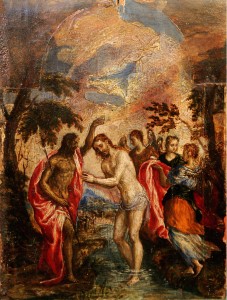 Filippino Lippi, The Adoration of the Child, 1480 (image public domain). The two chestnut trees in the background are thought to represent the Immaculate Conception and the Resurrection. 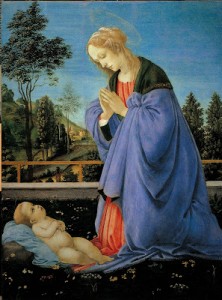 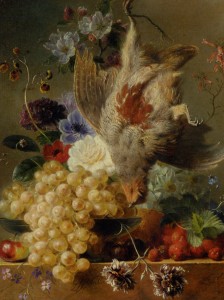