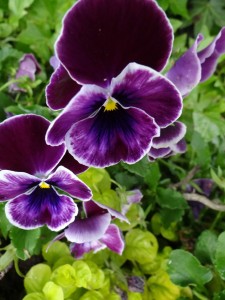 In the Midwest, we’re all pretty familiar with fall mums, Russian sage, and flowering kale as the main staples of the late-season garden. These plants are tolerant of cold nights and less sunlight. But why not add pansies to your selection?

Until recently the general public was unaware that the pansy is not heat tolerant, dying out in the summer. It flowers best when night temperatures are in the 40s and day temps in the 60s. Many areas of the Pacific coast are blessed to grow them all year round! The pansy grows well in Zones 3-7. In the northern zones if you plant the little lovelies in late September it will bloom until covered in snow. 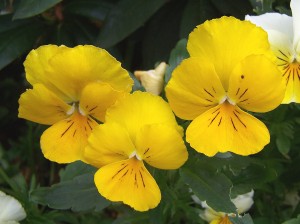 Things are a bit different for species violas (Johny Jump-up or Heartease). It is the small flowered parent of the bold faced pansy, and will winter over–usually for only two years–and bloom in the spring, being a tender perennial that reseeds. The pansy, a hybrid viola, is a biennial grown as an annual.

Agrilife Resources gives a bit of history of the pansy’s evolution from the wild viola:

Viola is a large genus containing 500 species…. and were familiar to people living in Greece in the 4th century B.C. The center of origin for the plant was continental Europe. The hardy but delicate viola was cultivated by the Greeks for herbal medicinal use and much later inspired William Shakespeare to write of romance.

Some time after the 4th century B.C. in Europe, an acute observer noticed a plant similar to a viola but growing in open areas with more sunlight. This plant thrived in alpine meadows and on rocky ledges. Someone named this plant a wild pansy. Possibly, it was a person living in France who noticed this plant because the word pansy is traced back to the French word pensee, meaning thought or remembrance….

In the last 50 years much of the innovative pansy breeding has been in Germany, the United States and Japan. New pansy colors such as shades of pink, rose or orange and unusual bicolor designs have expanded the variety of pansies available to gardeners in North America

Compact and low growing, pansies are not fussy plants, growing best in a loose, rich soil. They prefer full sun. If you want instant color in their garden, you will find packs and flats of pansies at local nurseries or garden centers. Select the flower colors that suit your garden design. Choose plants that are stocky with dark green leaves, with a few blooms showing but lots of buds.

With the short growing season, plant them closer together than what the tag instructs for a burst of color. They are lovely planted at the base of fall mums, replacing spent flowers in containers, or in a grouping filling in where more tender annuals were removed.