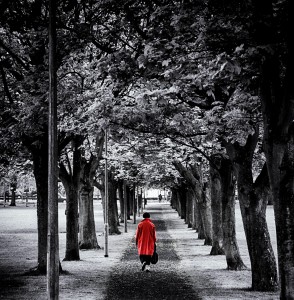 I’m still trying to find my place as a pray-er among the residents at the women’s care facility. As an introvert and hermit, and with what little social skills I possess, the challenge is large.

I had been given a list of names of the women who are Catholic and ambled to each room to introduce myself. Awkwardly I’d pause to greet those in the corridors and sitting areas.

In the first room, the woman sat on the side of her bed, a wheeled oxygen tank between her knees and tubes under her nose. She was confused by my presence but not my purpose, and accepted my offer to pray with her. She’d scurried to the administrator’s office when I left her room. I learned later she had asked if I were real—and convinced that I was—asked if I would come again.

My next stop was with a very joyous developmentally-impaired woman. I’m not a touchy-feely kind of person and found her advances to hug and touch off-putting. I struggled to hold my ground against the urge to back away. She could not understand that I was offering prayer, telling me instead of her upcoming birthday and of many other happy things.

I knocked on two more doors, shamefully relieved that there were no responses, and headed upstairs. In the stairwell I stopped, overwhelmed. I was ill-prepared for the emotions that flooded my heart.

I was upset because of the confusion I felt in the presence of these women, and questioned if I lacked genuine love in my actions. I wanted to feel that my presence gave validation to Jesus’ love, and to feel pleasing to our Lord. I felt none of this. What I felt was the little love I had was barely enough to keep me moving to the next floor, let alone sufficient to be a presence to these ladies.

Leaning against the banister I steadied my resolve to follow the promptings of the Holy Spirit felt months ago. I prayed for those I had just encountered and for perseverance and the confidence to move on.

Later at home in my oratory I thought about my shortcomings of truly being the hands of Christ. I felt that the spiritual food I had to offer was not enough for the enormity of the summons set before me.

As I sat in silence, the story of Jesus feeding the 5,000—more than that counting women and children—came to mind. When I read the Bible passages (Mt 14:13-16, Mk 6:30-37, Jn 6:1-13) something struck me. Consistent in all three, Jesus did not say to the apostles that he would feed them—he said you feed them.

The apostles begged Jesus, for the good of all, to quickly send them away. There were too many in need for only a dozen hands to feed.

Jesus knew that with what little they possessed there was enough for him to work with. He didn’t change the venue of the challenge; he multiplied the bits and pieces that they had to meet the need at hand.

I only have a small amount to share—of confidence, courage, and love. But in the hands of Jesus, what little I have is multiplied enough to feed those standing beside me, and he gives me enough for another day.

There’s a miracle in here, somewhere. I’m just too startled to see it.