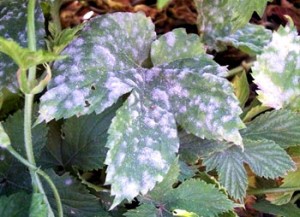 Powdery mildew is a general name for a few different species of fungi that infect several ornamental plants, such as zinnias,Monarda, lilacs, and roses. It also affects vegetables and fruits, including beans, grapes, cucumbers, beets, melons, and squash to name a few. It can affect the flavor and reduce yields of some fruits and vegetables. Prevention and control is important.

Powdery mildew is found throughout North America. It appears as a gray talcum-like powder on leaves and may spread to flowers and fruit. Powdery mildews, as a general rule, do not require moist conditions to establish and grow. Warm days and cool nights—not water—increases spore production.

Powdery mildew can be prevented, and it can be controlled once it appears, but it can’t be cured. The key to preventing it is planting mildew-resistant or mildew-tolerant varieties. Resistant varieties get less mildew than susceptible varieties; tolerant varieties may get some mildew, but it shouldn’t affect the performance of the plant. Prevention also includes sitting plants where they will have good air circulation, and exposing as much leaf surface as possible to direct sunlight, which inhibits spore germination.

Homemade Sprays
Research studies in 1999 and 2003 on infected zucchini and winter wheat (respectively) indicated that spraying cow’s milk slowed the spread of the disease.

To try this at home, mix 1 part milk with 9 parts water and spray the stems and tops of leaves with the solution. Reapply after rain.

When you first notice the blight, and if it is still minor, pick off affected plant parts, bag them tightly, put them in the trash, and thoroughly wash your hands. I do not recommend composting diseased plant materials—no matter how hot the pile gets.