She was a full-bodied woman and reminded me of Oprah, as Sophia, in the Color Purple. Her one eye watered and drooped much the same as that character. Her walk was a shambling gait of exhaustion.

Her niece had brought her shopping for clothes. The three of us exchanged niceties among the racks of plus-size blouses and stretchy jeans. With shortened breaths she told her niece she wanted a colorful top, she needed color after being so long in dingy gowns. I too was shopping for a blouse, one of modesty for my ample bosom.

Having made my selection, and passing by the two women, I headed for the fitting rooms. The Oprah-esque woman complimented me on selecting one particularly bright blouse of reds and magentas, said it reminded her of mornings. The niece asked where she could find one for her aunt. Delighted to assist, I pointed out the nearby rack.

When I returned I saw the two women had been joined by three others. They stood clustered together in the main isle. As they talked the three would touch the big woman’s hands as the niece steadied her aunt by the elbow. Among prayers and “Praise the Lord” they asked her if she had seen The Pastor…they were from the local Baptist church.

As I looked though the racks of sweaters and vests I overheard bits and pieces of their conversation—I really wasn’t eavesdropping. Apparently sister Oprah-esque had been in the hospital for several weeks and was still unwell. When I heard whispers of “go ahead and cry” I looked up. Several sets of hands offered tissues to the woman.

I felt compelled to approach and hesitated. To move toward the five black women would be to intrude into their circle of friendship and disrupt the private sharing of compassion.

I asked God to guide my words, approached the group, and apologized for interrupting. There was a hard silence as they all lowered their gaze on me. I looked to the woman who was ill and asked if I, too, might be allowed to pray for her. She took a few seconds to look into my eyes, then down to my neck where a two-and-a-half inch crucifix hung.  While she sized-me-up I spoke again, and through the silence asked if she would mind giving me her name that I might offer prayers on her behalf.

To give someone your name is entrusting them with something very personal. Joanne McPortland recently wrote about the power of a name in her columns on the O Antiphons. The Antiphons are the seven prophetic chants that evoke the Messiah by one of his titles. In her second post she wrote:

Names mean something. In the ancient world, the cauldron of cultures where Israel took shape, all words were performative: they called into existence what they described. Names and titles defined relationship. One’s true name was a word of immense power, guarded carefully. To entrust another with one’s name was an act of the deepest intimacy because of the vulnerability such a revelation implied.

Intimacy has depth, it carries trust. Those five women shared an intimacy; they knew each other by name and in life. When we hear our name spoken with kindness, the loveliness of hearing it makes our heart flutter. We think, maybe unconsciously, someone knows me and wants me.

The sick woman would be giving her name to a stranger. She would be entrusting spiritual intimacy to me, a woman she knew nothing about.

I exhaled—not realizing I had been holding my breath—and nodded.  I pulled pen and pad from my purse and felt blessed as she, seeing me writing, gave her middle and last name as well.

I thanked them all for allowing the interruption and for giving me the opportunity to pray for Mae. I walked away and heard their voices return to the chattering of friends. Before I left the store I gave the sunrise blouse to the cashier, and indicating, told her it was for Mae.

Once home, I taped the note with Mae’s name to the prayer board. It hung beside the handwritten column of others for whom I pray. The names on that board are spoken each morning for those in need. I know little or nothing about most of those I lift up to God. But there is a spiritual intimacy in praying for a soul, in speaking their name, and I gained a new affection with Mae. 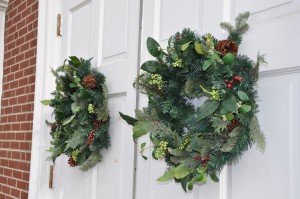 Last week’s post on the herb, rosemary, brought requests about other symbolisms of plants in our Christian traditions. The meanings of evergreens in the language of flowers will be new to some of you, and familiar to others who may have read this column before.

During the Christmas holidays I love how the fragrance and beauty of evergreens adds to celebrating this holy season. Many of us add Christmas trees (originally called the Paradise tree), wreaths, or garlands to our homes. Collectively, evergreens for early Christians symbolized everlasting life because their boughs stay green all year.

A wreath, being a circle, has no beginning or end and symbolizes the eternity of God, the immortality of the soul, and the everlasting life found in Christ. The wreath, when decorated with evergreens, which are symbolic of life itself, points to God’s gift of life even as the world grows dark and plants die back with the lessening of sunlight hours.

Many kinds of evergreens are used in the wreaths, swags, and garlands that decorate our churches and homes. Each type of evergreen has its own meaning in the language of flowers.

The most commonly used evergreen for wreaths is balsam and it has the symbolic meaning of eager anticipation–a familiar emotion associated with Advent.

Frequently used in garlands as well as wreaths and swags are fir boughs, symbolizing a lifting up, and pine that conveys the meaning of eternal life.

Spruce boughs represent hope in adversity, and isn’t that a lovely sentiment when we think of what Mother Mary faced before the birth of Jesus.

Cedar is one of the more fragrant and longer lasting evergreens and indicates incorruptibility and healing, and so it is associated with eternal life through Christ.

Juniper symbolizes protection, and that they do well!  If you’ve ever had to trim juniper branches you know how prickly and harsh they can be. (A great shrub to plant under windows to ward off intruders!)

Holly carries a few different symbolisms. In the language of flowers it means to foresee as in to understand in such a way as to predict, to prophesize. Holly is also used as a reminder of where Jesus’ birth and life will lead; its prickly leaves are reminiscent of the Crown of Thorns and the red berries of the blood He shed upon the Cross.

There are other non-evergreen plants often used in Christmas decorations. Bay laurel symbolizes a just reward, a victory over death. The delicate white-berry mistletoe is said to represent overcoming difficulties. And the unpresumptuous ivy holds one of the dearest images; that of clinging to God. It also symbolizes protection, joy and fidelity…all consistent with “to whom we cling.”

So now, when you look at your decorated tree, the wreath on your door, or the lovely evergreen arrangement on your table, you know they say more to you and your guests than Merry Christmas. 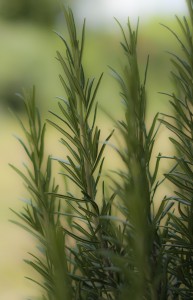 I thought it would be nice to share this blog from last year with all the new visitors to Morning Rose Prayer Gardens…and gently remind the rest of you of an alternative. Many of you know I’m on a mission to dethrone the poinsettia as the Christmas plant in Catholic homes and churches with the herb Rosemary officinalis.

The poinsettia’s association with Christmas began in Mexico in the 1600s. A legend tells of a young girl, too poor to provide a gift for the celebration of Jesus’ birthday, was told by an angel to gather a certain weed from the roadside and place it in front of the altar. When the girl had done so, the top leaves of the plant turned crimson and became beautiful poinsettias. InMexico during the 1700s, Franciscan friars included the plants in their Christmas celebrations. The star-shaped leaf pattern is said to symbolize the Star of Bethlehem, and the red color represents the blood of the crucified Jesus.

Poinsettias, the harbinger of the Christmas season, were made popular by the Ecke family. They grow in bright reds, pinks, burgundies, or white with “petals” broad and smooth, crinkled tight, or scalloped. The poinsettia can be purchased everywhere from local greenhouses to big box stores. This plant markets well, it’s showy!

Sure, the symbolism for the poinsettia suggested by the Franciscans is nice, and the plant is lovely, even if a bit overdone. But how about a plant that was present from the Incarnation to the Resurrection of the Christ?

These lovely topiaries are available from Sage & Company, sagefgh.com

Rosemary officinalis was a common and relatively large shrubby herb found throughout the Middle East during the time of Mary and Joseph. Why is it not mentioned in the Bible? It would be like writing about dish soap…functional, necessary, and irrelevant to The Story.

Rosemary was a utilitarian herb used for maintaining a household. One if it’s many uses was to repel insects; it was incorporated into straw mattresses. Joseph, having been a bachelor for most of his life, knew about adding this herb in his own bedding.

When it came time for Mary to give birth, Joseph probably busied himself preparing a bed for the newborn. More than likely he only had to step a few feet outside the stable to find this bushy herb. Snapping off a few fragrant oily springs, he would have added them to the manger straw to protect the infant Jesus from biting bugs.

The Holy Family lived as any family in that century, and the chore of laundering fell to the mother, Mary. Here again rosemary was used. The clothing was laid to dry on its branches. The heat of the sun against the clothing drew the oils into the cloth to freshen and again protect. Throughout Jesus’ life, his clean clothes carried this fragrance.

In the religious practices of that time rosemary was strewn in the tombs of the departed. The holy women coming after the Sabbath to anoint Jesus would have carried this herb, and in all likelihood thrown it aside when they discovered the risen Christ.

In the language of flowers this herb symbolizes remembrance. What a beautiful plant to have present in our homes or in front of the altar during Christmas. It will help us call to mind the life of Jesus from the Nativity to the empty tomb.

I hope you will include in your Christmas decorations a lovely rosemary plant…it’s not just for chicken anymore.