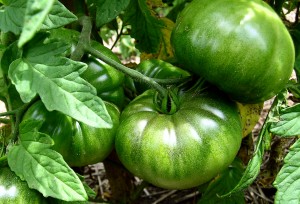 Instead of pictures, I thought I would share this information from Horticulture On-line:

The biggest mistake people make when trying to ripen green tomatoes is placing them on a windowsill. The light shinning on the fruit will actually cause the skins of the tomatoes to become tough. A better way to ripen green tomatoes is to place them in a paper bag, wrap individually in newspaper or set them in any other enclosed space, such as a cardboard box. By doing this, your tomatoes will keep warm as well as release a gas called ethylene—which is often used by commercial growers to produce a more successful yield. The warmth and the gas will help to speed up the ripening process.

I have used a sturdy banana box, lined it with newspaper, nested each (unblemished) tomato–blossom end up–in  its own piece of newspaper, and then lined them up in the bottom of the box. With blossom end slightly exposed it is easy to tell which tomatoes have ripened enough to use first. Only stack two layers of tomatoes to prevent crushing, using another layer of newspaper in between and on top. My boxes of tomatoes were stored in the basement on a shelf where it is away from heat.

It was not uncommon to eat a garden tomato in January!